Stage review • Winning cast plays to an audience that appreciates the inside jokes.

Forget Broadway. If you can set aside the profanity and crudeness, there's no better place in the world to watch The "Book of Mormon" musical than Salt Lake City. The whole show was written for us.

This is, after all, a place where being "really nice to everyone" is part of our breeding. And all the in-jokes about naive missionaries and repression and Mormons who "just believe" and the idea of "Sal Tlay Ka Siti" as a mythical place found their targets in the hometown crowd.

There's a compliment to being the subject of such big-budget satire, and on Wednesday's media night at the Capitol Theatre (the run continues through Aug. 9), audiences responded enthusiastically to the attention.

Just about everybody else in the world also gets the universal joke of the show created by Matt Stone, Trey Parker and Robert Lopez — that it's fun to laugh at the crazy-sounding nature of religious stories while you're also satirizing both American religious imperialism and the entire population of Uganda. And of course, most everyone in the world got first dibs on those laughs, thanks to the headline-grabbing Broadway show that earned nine Tony awards in 2011.

The Utah audience reacted knowingly to the door-knocking opener, "Hello!," the repression of "Turn it Off," the Donny Osmond joke in "All-American Prophet" and the dancing Starbucks coffee cups in "Spooky Mormon Hell Dream."

Best of all was the rafter-rattling applause for the mythical descriptions of "Sal Tlay Ka Siti." Beyond the set's exaggerated spires of the Salt Lake Temple, just two blocks away from the theater, you have to love the authenticity of the airport backdrop in a scene where LDS missionaries depart.

It's not a show for anyone who might be offended that the character of Jesus calls a rule-breaking missionary "a dick," or by a missionary who creates his own religion with apocryphal stories about sex with frogs curing AIDS. And despite an upbeat finale that ends the show, all is not well. The last line of dialogue, from a Ugandan character, undercuts all that optimism: "I still have maggots in my scrotum!" is the note on which the show ends.

Tell the Tribune: What did you think about "The Book of Mormon"?

The plot's pretty simple. "Book of Mormon" is a buddy story about a mismatched set of LDS missionaries, Elders Price (Billy Harrigan Tighe), the narcissist who thinks God has called him to do incredible things, and Cunningham (A.J. Holmes), the nerdy follower who has a tendency to lie when he gets nervous. Together, they are assigned to convert Uganda.

In Africa, the elders in District 9 find an angry warlord and an AIDS epidemic, which makes it difficult to share the message of the gospel set forth in The Book of Mormon by the "All-American Prophet," Joseph Smith.

Complications ensue, leading to scene after scene of the "South Park" brand of boy humor. One X-ray of a book of scripture in a very unholy place, for example, made all the male theatergoers around me groan.

Tighe's got solid leading-man talent but the tour direction (by choreographer Casey Nicholaw and Parker) doesn't allow the actor to rise above the character's stereotypes, made so memorable by the role's originator, Andrew Rannells.

Holmes is much more distinctive as Elder Cunningham, helped by his slim frame and nerdy gestures, which set his portrayal apart from the plumpness of Josh Gad's comic genius.

The missionary chorus, of course, is filled with talent. The ensemble earned plenty of laughs from an audience that you might guess included plenty of returned missionaries, yet the characters never broke out of their collective Pee-wee Herman-ish caricature.

The script's slight missteps, where Mormon characters say things like "Praise Christ," landed with a dull throb. While I think "Spooky Mormon Hell Dream" has always been a tone-deaf number, more successful at portraying generic religious guilt then the particular Mormon kind, the song wasn't helped when its lyrics were garbled and swallowed by the sound mix.

And the character of Jesus Christ, already a step across the boundaries of religious respect, simply didn't need such an exaggerated accent to be funny.

About that local reaction? The LDS Church bought three full-page ads in the playbill, and a few theatergoers appeared to walk out at one of the most outrageously crude numbers, when Ugandans present their version of the Mormon story.

Overall, of course, the energetically talented cast earned its standing ovation. In a fascinating reversal, several actors offered audience reviews — "stunning," "OUT OF THIS WORLD" and "so eager to share a laugh" — in tweets after opening night.

Yes, Salt Lake City can take a joke. This run of "Book of Mormon" is a great chance to remind us — the Mormons, the former Mormons, and those of who never were — that we live in a place with our own brand of metaphorical power.

"The Book of Mormon's" crude humor, delivered with brio by a talented cast, earns big laughs from a knowing local audience.

Running time • Two and a half hours, including intermission.

Lottery • Sign up at the Capitol Theatre box office for a ticket lottery 2 ½ hours before a performance; only one entry per person. Two hours before curtain, names will be drawn at random for one or two tickets. Winners of the cash-only tickets will pay $26 each.

For a more faithful 'Book of Mormon' story

"Nephi & the Sword of Laban" • Promoted as a musical that "accurately and respectfully" tells what The Book of Mormon is about.

END_OF_DOCUMENT_TOKEN_TO_BE_REPLACED

Robert Gehrke: How one Utahn used this pandemic to create works of art
By Robert Gehrke • September 30

Robert Gehrke: Like the mural in their honor, the history of Utah women should evolve toward inclusiveness
By Robert Gehrke • August 31 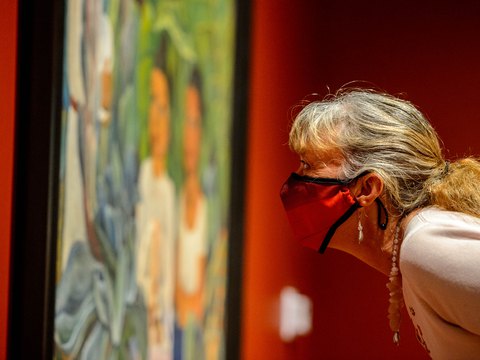