Eye On The Y: While BYU’s football and basketball teams were mired in mediocrity last fall, its other sports soared to record heights

Provo • BYU’s football team slogged its way through another less-than-inspiring season in 2018 and its men’s basketball program has a mediocre record (9-8) and was blown out three times in the past five games.

Then again, BYU’s non-revenue producing sports are thriving, so much so that the school’s overall athletic program finished the 2018 fall season ranked No. 5 in the nation in the Learfield Directors’ Cup Division I standings. The fifth-place finish ties the highest fall ranking in BYU history. The Cougars were also in fifth place in 1998, 2001, 2003 and 2016.

BYU earned points in all five fall sports it competes in: men’s and women’s cross country, football, women’s volleyball, football and women’s soccer. Its average fall ranking since the inception of the Directors’ Cup in 1993 is 16th.

No other athletic program in the state of Utah has ever finished higher in the standings than BYU. The Cougars’ highest finish following the conclusion of the NCAA season in June was No. 12 in 1998-99.

Stories from the past week

• Having announced back on Aug. 15 that it was making some upgrades to LaVell Edwards Stadium, BYU released artist’s renderings of what the finished product will look like. Trib

• There’s a reason why his teammates picked Luke Worthington as a team captain, even though the senior doesn’t play a ton of minutes. More on the guy Rose calls the best leader he’s ever coached is here. Trib

• Here are the gory details of BYU’s 22-point loss at McKeon Pavilion, where the Cougars always seem to struggle. Trib

• The Cougars came up with a split on their first WCC road swing of the season, beating Pacific and losing badly to Saint Mary’s. It just felt worse than it was. Trib

• BYU’s got a good one on its hands in rising sophomore center James Empey, who earned Freshman All-America accolades. Trib

• It might have been the most-watched BYU coaches show in history on Tuesday night as Rose provided an update on guard Jahshire Hardnett after a BYU fan website reported Monday night that the junior was quitting the team. Trib

• Running back Riley Burt joined the list of Cougars who are transferring out of the football program. Check out this story to learn who else is checking out. Trib

• It will be interesting to see what kind of crowd shows up Thursday night when the Cougars return to the Marriott Center for the first time in nearly a month, having gone 1-4 away from their building and getting blown out by 21 points or more twice. Trib

• Our former colleague at The Salt Lake Tribune, the esteemed Lynn Worthy, is now as the Kansas City Star and penned this interesting piece on how the Chiefs offense under head coach Andy Reid reaches back to Reid’s days under LaVell Edwards at BYU. Star

• Defensive back Michael Davis was benched his senior season at BYU, but is now a mainstay in the defensive backfield for the Los Angeles Chargers. It’s quite a story. Here’s how Davis fared Sunday, courtesy of the Deseret News. Dnews

As mentioned earlier, Worthington is the media’s go-to guy for updates on this 2018-19 BYU basketball team. Here’s what the captain said when asked Wednesday about the adversity the team is facing:

“We have had our fair share of challenges. We have had different guys at different points who have had things they have had to work through for all sorts of reasons, to be honest, across the board. And so fortunately we know how to handle them, and the way to handle them is to take one practice at a time, one day at a time, and just continue to try and get better. I think we had really great energy today. These last few days of practice have been really good. We are looking forward to a couple of home games and getting back here in the Marriott Center. I think the way to deal with any issue with a team is to continue to fight and play together and build on each other’s strengths.”

• BYU basketball is struggling, but star junior forward Yoeli Childs certainly isn’t. The Bingham High product has been named to the mid-season watch lists for the 2018-19 Lute Olson Award and the 2018-19 Lou Henson Award. Both awards are presented by CollegeInsider.com. The Olson award goes to the nation’s top Division I college basketball player, while the Henson Award goes to the nation’s top player who isn’t in a Power 5 conference.

Childs is averaging 21.6 points and 10.3 rebounds per game and has 10 double-doubles.

• BYU’s women’s basketball team is 12-3 overall, 4-0 in WCC play, and heads back out on the road this weekend for games Thursday at Pacific and Saturday at Saint Mary’s. Freshman guard Shaylee Gonzales has been the story of the season so far for Jeff Judkins’ crew. She’s averaging a team-best 17.1 points per game and has reached double figures in all 15 of BYU’s games this season.

• BYU’s women’s gymnastics team hosts No. 3 Utah on Friday at the Marriott Center. By all accounts, coach Guard Young’s squad is on the rise, having finished last season ranked No. 17 in the country, its highest national ranking in 13 years. Captain Shannon Evans leads the squad after earning All-America honors last year on bars at the NCAA National Championships.

END_OF_DOCUMENT_TOKEN_TO_BE_REPLACED 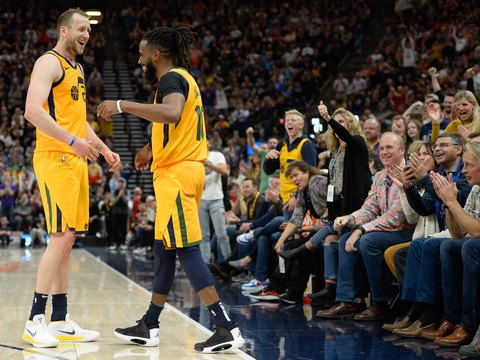 Emily Walker: Don’t be afraid to ask about suicidal thoughts
By Emily Walker | Special to The Tribune • 8m ago