He is brutally calculating in finding ways of casting large groups of people as undeserving of dignity.

Washington • It’s never right to call other human beings “animals.” It’s not something we should even have to debate. No matter how debased the behavior of a given individual or group, no matter how much legitimate anger genuinely evil actions might inspire, dehumanizing others always leads us down a dangerous path.

This is why we need to reflect on the controversy over exactly whom President Trump was referring to as “animals” during a roundtable discussion last week at the White House with state and local officials from California on so-called sanctuary laws.

On its face — and this is certainly how Trump wants us to view things — this is an argument about whether the media distorted his intent by reporting what he said out of context.

But Trump is responsible for this problem precisely because he systematically obliterates any distinctions between the overwhelming majority of immigrants who are law-abiding and the violent minority among the foreign-born.

The slippery inexactness of Trump’s language is often ascribed by his detractors to the deficiencies of his verbal skills and his lazy tendency to return again and again to the same stock words and phrases. Trump’s admirers frequently cite his use of colloquial language as key to his success in persuading so many that he is not a traditional politician. After all, the way in which he uses the word “animals” is drawn from common street-corner or barroom talk. It’s not a usage he invented.

But both of these innocent explanations underestimate Trump’s gift for using incendiary words that send clear messages to his supporters. He is brutally calculating in finding ways of casting large groups of people as undeserving of dignity. Dehumanizing those he and his core constituents see as radically different is central to Trump’s project.

The White House event where Trump made the comment was a gathering last Wednesday of California officials opposed to what Trump, in his introductory remarks, called “deadly and unconstitutional sanctuary state laws.” They offered, Trump said, “safe harbor to some of the most vicious and violent offenders on earth, like MS-13 gang members, putting innocent men, women and children at the mercy of these sadistic criminals.”

Trump’s use of “animals” came in response to Margaret Mims, the sheriff of Fresno County, who spoke of the problems created for local law enforcement by the conflict between federal laws and California’s sanctuary laws. Not being able to cooperate fully with federal immigration officials, Mims argued, made efforts “to find the bad guys” far more difficult.”

In a follow-up, Mims elaborated that “there could be an MS-13 gang member I know about” and that if “they don’t reach a certain threshold,” under the state’s law, “I cannot tell ICE [Immigration and Customs Enforcement] about it.”

This is when Trump declared: “You wouldn’t believe how bad these people are. These aren’t people. These are animals. And we’re taking them out of the country at a level and at a rate that’s never happened before.”

The New York Times and some other media outlets tweeted that Trump had used the “animals” reference about unauthorized immigrants generally and did not make mention of Mims’ invocation of MS-13. Trump’s claim is that it should have been obvious that he meant only MS-13 members. In a Friday tweet, he proclaimed that “Fake News got it purposely wrong, as usual.”

Here’s what’s insidious about this: Throughout his presidential campaign and since, Trump has regularly blended talk about all immigrants with specific attacks on immigrants who committed serious crimes — particularly those who belong to the murderous MS-13. Even assuming that Trump was, in fact, limiting himself to MS-13 in his reply to Mims, he has spent years creating rhetorical links between the foreign-born as a whole (especially those here illegally) and the bloodshed perpetrated by the few.

By playing fast and loose with language, Trump avails himself of escape hatches, as he did last week, and can then go on to cast his critics as defenders of criminality.

No one wants to be put in a position of seeming to say anything good about gang members. Yet Trump’s strategy of dehumanization must be resisted across the board. We cannot shy away from what history teaches. Pronouncing whole categories of people as subhuman numbs a nation’s moral sense and, in extreme but, unfortunately, too many cases, becomes a rationale for collective cruelty.

What’s not fake news is Trump’s refusal to take responsibility for using words quite deliberately to enrage, degrade and divide. In doing so, he debases and dehumanizes all of us.

END_OF_DOCUMENT_TOKEN_TO_BE_REPLACED

Letter: Good causes have killed the goose
By Carol Ogden | The Public Forum • 12h ago 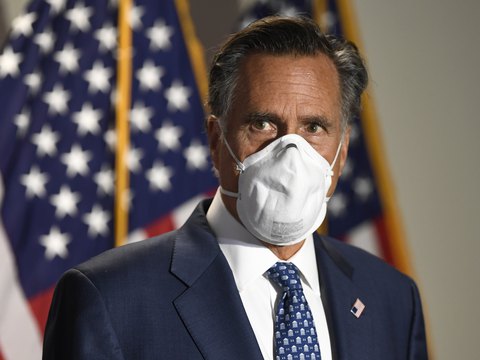 For Utahns, impact of Trump tax report may be in the eye of the beholder
By Lee Davidson • 2h ago