Video • Ex-sheriff troubled by what he says could be gunshot sounds on video.

Despite the district attorney's finding that the officer-involved shooting death of James Dudley Barker last January was justified, remaining questions should be answered for a complete account of the tragedy, according to an independent investigator.

Salt Lake County District Attorney Sim Gill said Tuesday that newly surfaced video evidence did not change his finding that Salt Lake City Police Officer Matthew Taylor was justified in the use of deadly force after Barker attacked him with a snow shovel.

However, William J. "Dub" Lawrence, a former Davis County sheriff who is now an advocate for police reform, said there are 20 to 30 seconds between police body camera footage and two other videos. It was during that gap that Taylor shot Barker three times.

Lawrence said Wednesday that questions remain about sounds on one video that could be gunshots; the integrity of the scene of the shooting; why witnesses were waved away; and why some information was not made public, including another witness video and an autopsy report.

Barker was seen in the Avenues neighborhood near the intersection of I Street and 2nd Avenue seeking work shoveling walks when police received a report of a suspicious man in the area.

A police body camera video shows Taylor confronting Barker on the porch of an I Street residence. Harsh words were exchanged, and Barker raised a snow shovel to strike the officer when the body cam video ends.

Two cellphone videos, one shot by a resident and another by a passerby, show Barker facedown on the ground with Taylor handcuffing him.

San Franciso-based attorney Robert Rubin said a video released by Lawrence on Friday appears to show the officer shooting Barker after he was handcuffed. Lawrence also provided that video to the district attorney's office.

Lawrence said the video had three sounds that could be gunshots.

Neither Rubin nor Lawrence were retained by Barker's family. Both men said they were looking into the case on a pro bono basis. On Wednesday, Rubin was in San Francisco and Lawrence was in New York City. Neither man had seen the newest video released Tuesday by the D.A. This video, made public by Gill, was shot from inside a car that shows Taylor's gun holstered and his hands clearly visible as he cuffs Barker. There were no gunshot sounds on that video. Gill said Wednesday that loud music was on in the car at the time of filming.

The D.A. noted, however, that the sounds on Lawrence's video were immaterial because the officer's weapon was holstered in the latest video.

In a telephone interview Wednesday from San Francisco, Rubin said that his prime motivation was to make sure all the facts surrounding the shooting were available to authorities and the public.

"Our purpose in this whole endeavor is to make sure the truth is found," he said. "If [the newest video] does, in fact, show that [Barker was not shot in the back], we are comfortable with that."

"It doesn't change the fact that the officer's actions leading up to the shooting were wholly unjustified and may be what caused the shooting," Rubin said. "You shouldn't be able to create a dangerous situation and shoot your way out of it."

Lawrence said he shares those concerns. He also said that the gunshot sounds should be further analyzed. Further, he was critical of Taylor for altering the shooting scene by picking up his stun gun and hat that he had lost during the scuffle. And Lawrence added that he was troubled by images of Taylor waving witnesses away.

Not least, Lawrence said, he was discouraged that none of the officers at the scene offered first aid to the bleeding man. It took a long time for the paramedics to arrive, he said.

"I'm not drawing any conclusions," he said Wednesday. "I'm not the agency that's making that determination. I'm just supplying them facts."

Gill also added that Taylor waved off passersby in an effort to protect the scene. Officers who arrived shortly after the incident began identifying and questioning witnesses.

A notable exception was Richard Grow, 67, who saw the men scuffling as he drove south on I Street.

"They wrestled on the ground for 10 to 15 seconds," he told The Tribune a year ago. Then he saw the officer "reach around his side and pull out his gun and hold it up to the guy's chest and bam, bam, bam. … Point blank against the man's chest."

As Grow approached the scene on foot, Taylor told him, "Get out of here."

Grow later went to the police department, of his own accord, and filed a report.

Investigators reinterviewed Grow after they viewed the cellphone footage released last week, Gill said. His account of the shooting did not change, the D.A. said.

None of the witnesses said Barker was handcuffed at the time of the shooting, Gill said.

Further, Gill said, a medical examiner's report indicates that Barker was shot as the men faced each other.

After Lawrence's video was given to the D.A. on Friday, Taylor was again placed on administrative leave, said interim Police Chief Mike Brown. Taylor was back on duty Wednesday.

END_OF_DOCUMENT_TOKEN_TO_BE_REPLACED 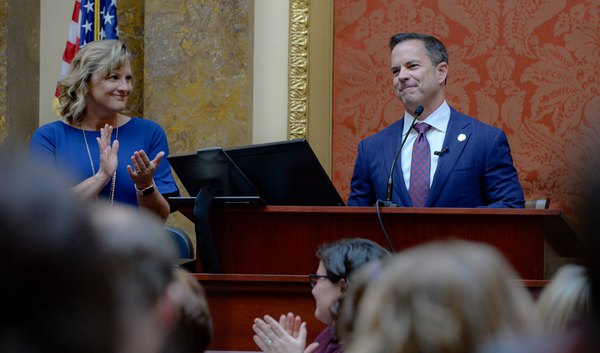 Robert Gehrke: Utah voters just proved that ‘all political power is inherent in the people’
By Robert Gehrke • 14h ago
END_OF_DOCUMENT_TOKEN_TO_BE_REPLACED
L