Phoenix • Republican U.S. Sen. Jeff Flake was caught on an open microphone saying that the GOP is "toast" if it follows Alabama Senate candidate Roy Moore and President Donald Trump.

Flake was talking to the mayor of the Phoenix suburb of Mesa after speaking at a town hall session for aerospace company workers Friday. He apparently didn't know the microphone attached to his lapel was still on when he said, "(If we) become the party of Roy Moore and Donald Trump, we are toast."

TV stations at the event picked up the comment.

Flake, an outspoken critic of Trump, announced last month he wouldn't seek re-election. He's said he'd "vote for the Democrat" if he were in Alabama and had to choose between Moore, who's facing sexual misconduct allegations, and Democrat Doug Jones.

END_OF_DOCUMENT_TOKEN_TO_BE_REPLACED
Donate to the newsroom now. The Salt Lake Tribune, Inc. is a 501(c)(3) public charity and contributions are tax deductible.
M

END_OF_DOCUMENT_TOKEN_TO_BE_REPLACED 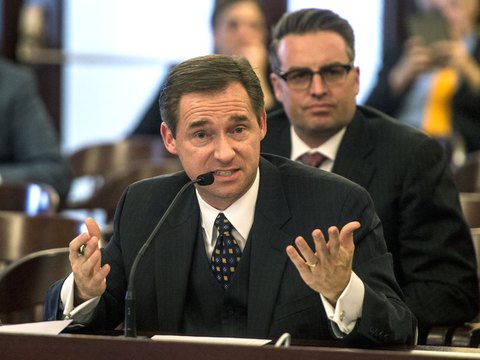